Boatshed Grenada
The Carriacou Schooner version of the Caribbean Dream
Friday, 04 May 2018

The Carriacou Schooner version of the Caribbean Dream 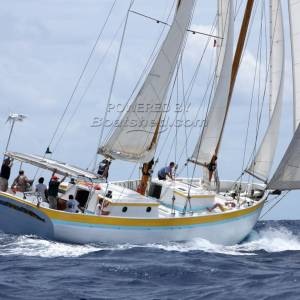 There are many different versions of the Caribbean dream,and the owners of this 73’ Carriacou Schooner have been living their own very unique version for the last nine years.

The story starts with stopping for a drink at a bar during a sailing holiday in the Grenadine islands and sharing the sunset with the owner of a classic Caribbean yacht. He had commissioned her in the late 1990’s and as anyone who has seen ‘Vanishing Sail’ will know, there are more highs and lows to the construction of a traditional Carriacou sailing vessel in the village of Windward than can be covered in a few sentences.

Cutting white cedar when the moon is waning, sourcing silicon bronze fastenings and interference from Hurricane Lenny in 1999 are all part of the history of this schooner. Designed by Jessie Compton and built by Alwyn Enoe, she was launched from the beach in Windward in the traditional manner in 2002 with a chicken sacrificed and much rum consumed.

The original owner was by now ready to move on and in 2009, the current owners bought her and have cruised and chartered her in the Caribbean since then. She is well-known regionally as a distinctive and successful owner-operated crewed charter vessel and there are plenty more stories from the last few years - new mast, weathering storm warnings in mangrove-lined hurricane holes and Concours d’Elegance and line honours at Antigua Classics Regatta – which should probably be told back in a Grenadines bar over a cold beer or a rum.

She was extensively refitted in 2010 with new engine, mechanics, electrics and plumbing. New owners may wish to continue to run her as a charter vessel, take her cruising and show her off on the Caribbean regatta circuit, or she makes a spacious and comfortable home with 4 cabins, 3 heads, a centrally-located galley and plenty of deck space. 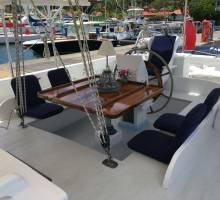 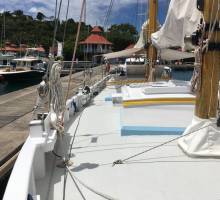 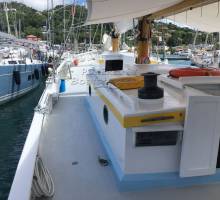 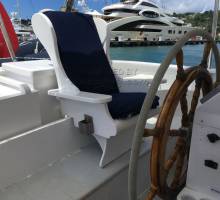 A helm seat fit for a captain! 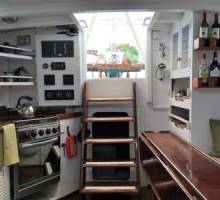 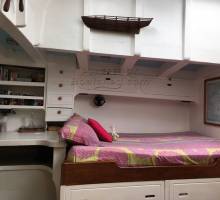 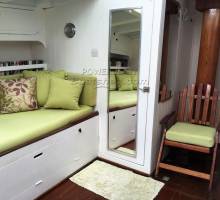 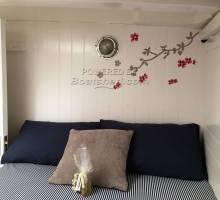 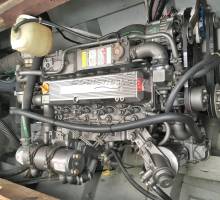 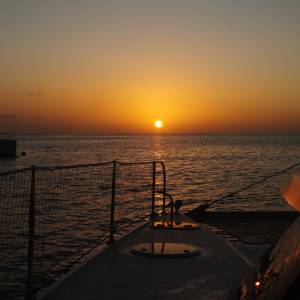